Many commentators suggest that a negative term spread (inverted yield curve) in the US may signal an imminent recession, but other data is more positive. In this post, I use an R program jointly with the FRED data base to shed some light on the risk of a US recession.


Spurious correlation and a test for leading indicators

Before we delve into data analysis, I want to emphasize a problem when eye-balling lead-lag relationships between GDP growth and potential leading indicators. If two time-series are persistent, meaning that they exhibit long-lasting cycles, we may wrongly conclude that one leads the other. In fact, if two time-series are persistent, we will likely find spurious correlation between the two when in fact there is no relationship.

To show this, let us first look at some simulated data. I simulated 1,000 observations for three persistent time series:

Indeed, when looking at the cross-correlation between y and z using the pre-whitened data, we do not see any clear lead-lag relationship (Figure 2). However, we find a significant cross-correlation between y and x at a lead of one period, exactly how we simulated the data. This shows that the approach is useful to detect the true underlying lead-lag relationship between a leading indicator and a target variable when the time series are persistent


What does the term spread tell us about US GDP growth?

Let’s apply this idea to US data, in particular, to the term spread. What I want to examine is whether the term spread is a good leading indicator for quarter-on-quarter US GDP growth. I therefore aggregate the term spread to quarterly frequency and calculate the cross-correlation function using the original and the pre-whitened data.

Looking at the original data, we see that the term spread is relatively persistent, as shown in the auto-correlation function in the lower left panel of Figure 3. The cross-correlation with GDP growth exhibits many significant lags. Actually, we may conclude that GDP growth is a leading indicator for the term spread! In addition, the relationship is negative meaning that a decline in GDP growth is followed by an increase in the term spread. This is a consequence of the spurious correlation problem.

A composite leading indicator for the US

Of course, we can repeat this for other indicators as well (See the R file and FRED for sources and a detailed description of the data). Table 1 shows a summary of all the indicators that I examine:

Based on this data set, we can then construct a composite leading indicator (CLI). I normalize all the indicators with a clear leading relationship with GDP growth, shift the indicators in time so that they exhibit the same lead on GDP growth, multiply them with -1 if they are counter-cyclical, and then take an unweighted average.

Figure 5 shows that the leading indicator (in red) tracks the major movements of GDP growth rather well (in blue). The short-term fluctuations, however, are not captured by the CLI. As the main purpose of the indicator is to signal recessions, we can compare it to the official dating by the NBER (lower panel). We see that the CLI declined strongly before all NBER recessions. In addition, there are few “false positives”, meaning that the indicator declined strongly where in fact there was no recession.

Focusing on the recent period, we see that this leading indicator has declined, but remains around its long-run average (red dashed line). Notably it remains much higher than during the Great Recession or the burst of the dot-com bubble in the early 2000s. This means that, although the term spread may point to a recession, other indicators paint a more benign picture of economic activity in the US. 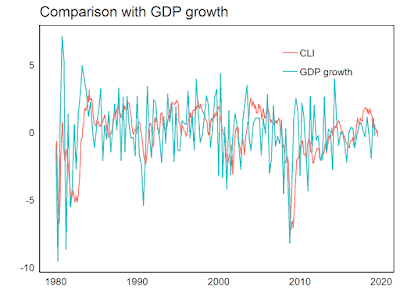 This analysis showed that the term spread is a useful leading indicator. However, we should not only look at the bond market. Early available surveys and hard data also contain useful information and this information points to more robust GDP growth than the term spread.

PS: Do not hesitate to use the R program for your own purposes. If you do and find ways to improve it, please let me know in the comments. 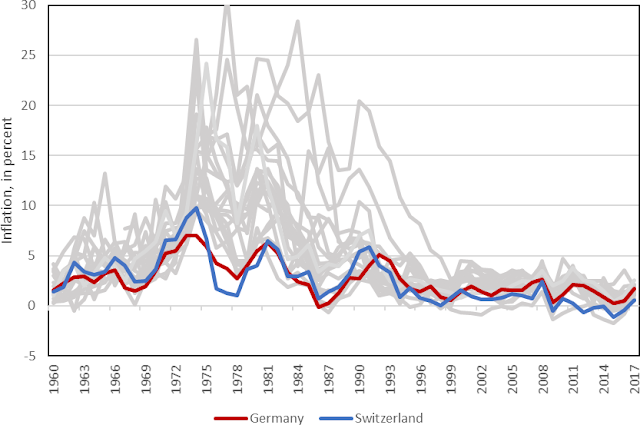 I am an economist and assistant professor at the University of Neuchâtel. Follow me on Twitter @KaufmannDani and visit www.dankaufmann.com.
This blog is mainly about Swiss macroeconomic and monetary issues. It is a diary of observations, thoughts, and open questions that I find interesting. So expect preliminary ideas and feel free to discuss.